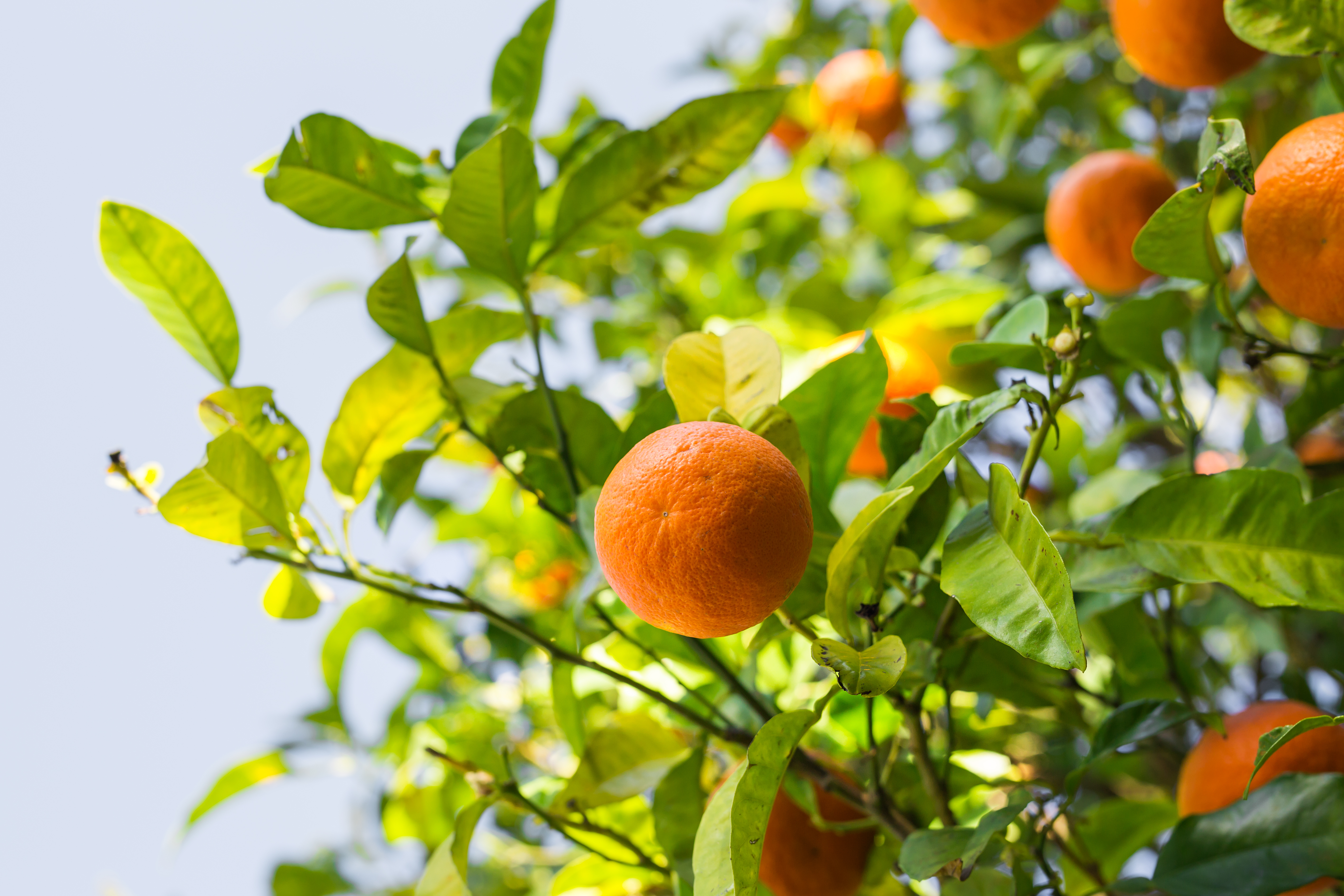 The late-season easy peelers campaign (January to April) is a useful fallback for many Mediterranean producers, often faced with nrewarding prices, even below production cost level, during the mid-season.

The late-season easy peelers campaign has in recent years remained a safe bet, despite considerable growth in the supply during the period January to April. Our average price indicator for the campaign has since 2014-15 peaked at a reassuring level of approximately 1.40 euro/kg, while the supply has risen by 25 %, i.e. 100 000 t.

This fallback represented by late-season easy peelers will this season be more akin to a lifebelt this season, so calamitous was the first part of the campaign. The production levels of the main supplier countries to the EU-28, ranging from very high for Spain to record for Morocco, needed very open markets. Yet everything seems to have been conspiring against the citruses trade since September. The late start to the season, due to the extension of the Southern Hemisphere campaigns, and above all the delayed maturity of Mediterranean production, resulted in the loss of two or three precious weeks’ trading. Thereafter, the “yellow vest” social movement in France complicated logistics to all European Union consumer countries, and weighed extremely heavily on the French market, which remains an outlet of vital importance for Spain (approximately 20 % of the country’s total exports). Spanish citrus volumes sold between the beginning of the season and early December registered a fall of 15 to 20 %, according to several largescale operators. Finally, the very mild temperatures and very high cumulative rainfall in the Valencia region (more than 330 mm between September and November, as opposed to less than 25 mm in 2017) could weaken the shelf life of the Nules clementines and hit the market context in early January, a time when the late varieties are starting to make their presence felt.

Record volumes for all late cultivars in Spain

Unsurprisingly given the expanding cultivation area, the late-season easy peelers supply promises to be considerably bigger than in 2017-18. In Spain, production has reached record levels for the end-of-season varieties, with the plantations set up in recent years coming into their prime. The Nadorcott harvest should rise by approximately 12 % to in excess of 230 000 t. There should be a distinctly less marked increase in the Valencian Community (+ 23 %) than in Andalusia and in the Murcia region (approximately + 5 to 6 %). Volumes shipped should be around 205 000 t. The supply should rise in more modest proportions, by approximately 8 % for Orri (nearly 56 000 t expected). The alternate bearing phenomenon is in place, after volumes doubling between 2016-17 and 2017-18. Conversely, the Tango supply should more than double to reach 60 000 t.

Stability or back to average in Morocco and Israel

Growth in volumes will not be as high for the two other players on this market. Despite young orchards entering production or coming into their prime, the Nadorcott harvest should barely be bigger than in 2017-18 for Morocco. The climate conditions have been unfavourable, especially during flowering. Hence exports should be practically stable, at approximately 175 000 t. In Israel, the Orri harvest level will rally after the deep trough seen in 2017-18, though it will remain average nonetheless. The 135 000 t of production expected should enable exports of approximately 95 000 to 100 000 t, volumes which are still below the record of 104 000 t, from 2016-17. With the shekel climbing against the euro, the outlet diversification trend to the dollarized markets of Asia and above all North America should continue.

Farmers with over 50 years of experience Management, control and traceability from the orchard to the end customer International quality standards and certification.

Volumes available across all origins and varieties should therefore be approximately 600 000 t, a rise of approximately 100 000 t from the previous season. Should we be afraid of an increase of this sort? The market’s reaction to the increase in the supply over recent seasons enables us to be reasonably optimistic.

The great steadiness of our price indicator in recent campaigns, while volumes have increased considerably, is indicative of the solidity of demand. We should recall that these varieties have a wide trading window (until April, or even early May for Orri), which covers the last period when consumption still seems able to rise.

The updated cultivation area survey for the late varieties makes it possible to make a rough projection of the volumes to come in the medium term (within the next five years). Orri surface areas have stabilised at 5 000 ha in Israel, after some uprooting in zones not suitable for this demanding variety. The export potential should eventually be around 120 000 to 125 000 t. Similarly, the Moroccan Nadorcott cultivation area is now stagnant. The 7 600 to 8 000 ha planted should take the export potential to reach 260 000 to 270 000 t within five years.

The situation in Spain is more mixed. The planting quotas opened by the administrators of the Nadorcott and Orri varieties have been exhausted. Surface areas have stabilised at approximately 5 400 ha for Nadorcott and approximately 2 000 ha for Orri, with export potentials eventually expected to reach 200 000 t and 70 000-75 000 t respectively. Conversely, planting is still ongoing for Tango. The cultivated surface areas are estimated at approximately 3 000 to 3 500 ha. They should provide an export volume of approximately 120 000 to 140 000 t. Hence the supply of late-season varieties should be around 800 000 t within five years, i.e. 200 000 t more than today. If we take into account the current breakdown volumes by market, approximately 160 000 t should be earmarked for the EC market. 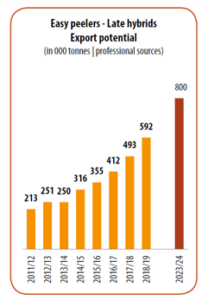 Toward a fragile balance on the EC market?

Is the EC market able to absorb these volumes without a deterioration in the profitability level, currently vital for the upstream segment? True, the average annual increase in the supply may seem moderate (160 000 t over five years, i.e. approximately 32 000 t per year). Moreover, the late-season easy peelers slot is the only where some growth seems possible. Yet this can only go so far. In an attempt to estimate the possible margins for growth on the late-season market, we have tried to identify monthly demand for easy peelers, under certain hypotheses.

The analysis shows that consumption levels are already extremely high in January (the number two month by volume after December). Positioning the 160 000 t of additional volumes from February to April would involve increasing consumption by more than 30 % over this period. When these additional volumes are distributed over the three months using current distribution keys, the consumption level for February would be similar to November. This analysis remains highly schematic, yet it shows that currently planted surface areas are already harnessing very big margins for consumption growth. 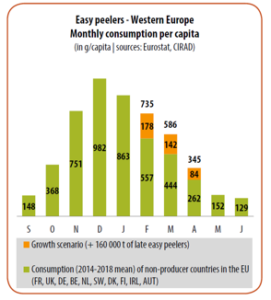 Turkey getting in on the EC market for late-season hybrids

We also need to take into consideration the other producer countries which have also embarked on significant growth in surface areas of top-end late-season hybrids. Egypt has a cultivation area of approximately 500 ha of Tango. This relatively modest production should be earmarked primarily for the Persian Gulf markets. Surface areas should be considerably bigger in Turkey. According to estimates, approximate given the lack of serious surveys, the W. Murcott cultivation area is around 6 000 ha. These “unlicensed Nadorcott”, which cannot be sold in the EU-28, will probably be earmarked for Turkey’s other traditional markets (Russia, Eastern Europe not in the EU-28, Middle East). Conversely, the country apparently has a cultivation area of approximately 2 000 ha of Tango, which should be sold on the EC market, at least in part. 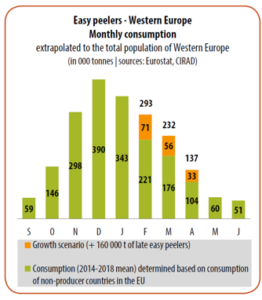 Given these prospective volumes, it seems important to redouble efforts to diversify the outlets and develop shipments to alternative markets (North America, Asia, etc.). Furthermore, prudence should also be the watchword in the planting programmes: as the rights holders for Nadorcott and Orri have realised, by freezing cultivation areas and effectively combating illegal planting. The work conducted by the Orri Running Committee is exemplary in this respect, thanks to the innovative control tools developed (geolocation of authorised orchards) and to a policy of systematic prosecution of fraudsters (more than 100 legal actions implemented during the period 2017-18). Conversely, the total absence of regulation of the Tango variety is dangerous, in particular in a context where the market balance over the coming years seems fragile to say the least. Producers wishing to invest must be well aware, especially since the court proceedings between Tango and Nadorcott breeders is still not complete.